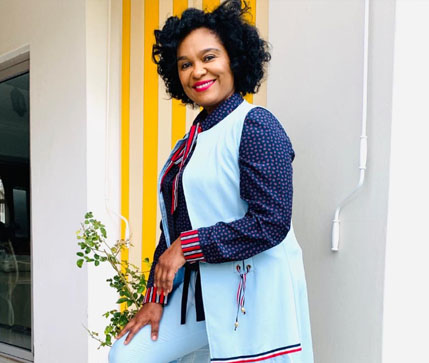 Born and raised in Umtata, Noeleen is a journalist by training and has spent a number of years in news handling both Radio and TV for Radio Transkei and Radio 702 respectively.Having spent a period of six years at Radio Transkei, Noeleen has had the opportunity to develop in-depth knowledge of journalism as well as Public Relations both in its theory and in its application. In pursuit of better prospects, Noeleen moved to Johannesburg in 1994 to join Radio 702 as junior reporter before landing a co-hosting job. She worked her way up and in the space of four years became the station's news editor. From 2001, she was on the Primedia Board and hosted her own daily show before leaving the company at the end of 2002.

Noeleen registered for a Management Advancement Programme (MAP) with Wits Business School and duly completed the programme in 1999.

When Noeleen Maholwana-Sangqu burst onto South African TV screens early in 2003, it may have been her screen debut but she brought a formidable CV as the queen of talk. Well-cherished for her sharp, incisive questioning, sassy attitude and personal warmth, Noeleenâs new role as host on SABC 3 TALK was a challenge to bridge the digital divide from radio to television.

Over a decade later, Noeleen has bid a tearful farewell to the show that launched her television career. After 12 successful years she decided it was time to retire from her reign as the 'Queen of Talk'.